Many popular fly patterns are available up at the resort. At HiHium, we are very lucky to have an incredibly diverse and constantly evolving ecosystem. The lake is home to a variety of BC’s amphibians, birds, mammals, and insects, many of which can be imitated to produce effective trout patterns. Check out our wildlife gallery to get a better idea of some of these aquatic denizens. Whether if be trolling a leech, casting a dry line, chironomid fishing,  or using a flat fish lure, you are bound to get some great action while Kamloops trout fishing. Below you can find information about a few popular lures and fly patterns just to get you started. Note that many popular patterns are available for purchase up at the lake. 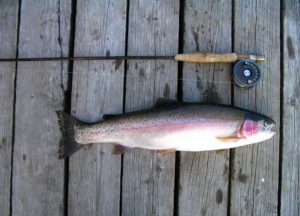 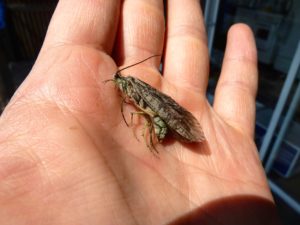 Bait Ban Rule:  use single barbless hooks and artificial flies/lures only! That means NO LIVE BAIT! Failure to comply can result in relinquishing of one’s fishing license!

Lures:
Many anglers report success using artificial lures such as spinners and flatfish. Mepps, Canadian wonders, daredevils, and wedding bands are great spinners. Hotshots, bingo-bugs, and flatfish of varying colours and sizes can be very effective at rousing the predatory or territorial instincts of rainbow trout, their distressing quick movements signalling easy prey. Cast a lure from a spin rod by the docks in the late afternoon or go trolling them in the early and late parts of the season for greater chances of success.
Make sure that your lures have single hooks and are barbless! Some manufactured lures have 2 sets of barbed triple hooks. The idea of multiple hooks puncturing a fish’s mouth is not pleasant for the fish or us removing it. Easily removable hooks are desired in the event that one wants to catch and release a fish.

The practice of catching and releasing a fish is totally up to your discretion. Keeping 5 fish a day per person and 10 fish overall per trip is the limit at HiHium Lake, and anglers are often left with the dilemma of deciding which fish to keep. Anglers must also keep in mind that only one of these fish is permitted to be over 50cm in length! Generally, anglers will release both smaller fish and spawners back into the water. Some anglers release everything altogether!  Spawners, especially females, have considerably less edible meat as their body cavities become filled with eggs. With less meat, spawners typically don’t smoke as well, and the meat that they do have is soft. It takes a season for spawners to clear up, but we guarantee that they’ll come back next year with a vengeance.

Smaller fish tend to not be angler wise and will strike indiscriminately at any opportunity to eat.  However, by releasing smaller fish, we relieve pressure on the lake’s natural population and give them a chance to grow to a larger size. A fish released one year may come back in a few as a great 6 pounder on your wall! 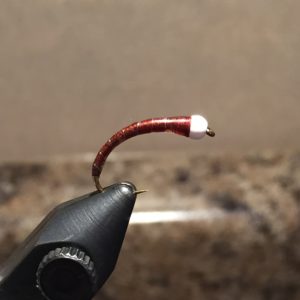 Chironomids are one of the most important staples of trout feed in B.C. fresh water lakes. They are the pupae (middle) stage of the midge fly that looks like a mosquito, but without the proboscis. The earlier developmental stage being the wiggling blood worm, and the adult form not being readily accessibly to trout. There are hundreds of chironomid species in British Columbia, each with a unique colouring and separate hatch/ascent time. Key into the right colouring while fishing for rainbow trout! 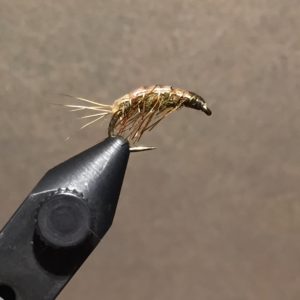 This original scud pattern is by Michael Mah of British Columbia. Scud patterns benefit from having curved backs, discreet ribbing, legs, and a small tail.

These amusing little shrimp ranging in size from mere millimetres to just just over a centimetre are an immensely important staple of the rainbow trout diet. In fact, the pigment keratin found in them is what gives our trout their rich red meat colouration. Just see our gallery for the proof! Scuds feed among detritus from weed beds and can be found among the shallows of lakes. Hihium possess a prolific scud population with its healthy weed beds, high water calcium mineralization, and alkalinity. You can’t go wrong with throwing on a scud, especially in the early morning hours or when the fish are trying to fatten up for winter.

Trout just relish caddis flies! All developmental stages of the caddis fly can be found in trout stomachs. Caddis flies are only found in clean water systems, so their abundance at HiHium is a fisherman’s dream. The larval stage crawls along the bottom near the shallows and weeds where they construct protective tubes out of vegetation, sticks, and pebbles. Sedges then enter a swimming pupal stage that trout attack as they make a dash for the lake surface. Flying adults are still game for trout, their fluttering clumsiness lead them to become easy prey. 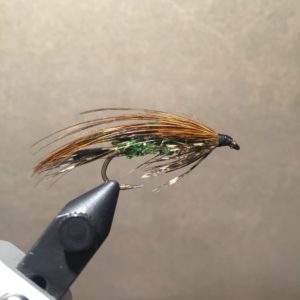 Leeches are favourite pattern for many lake anglers. If things are going slow on the water, give the leech a try. Large trout can often be coaxed into pursuing a heavy protein and calorie morsel if it’s presented conveniently. Leeches are nocturnal, so they may be especially effective in the early mornings or as dusk descends upon the mountain. 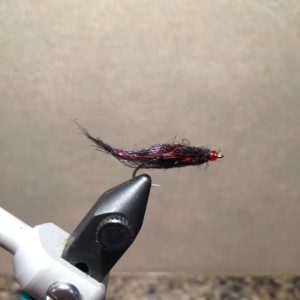 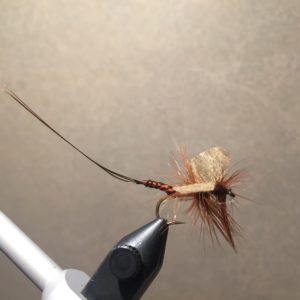 Mayflies are making a comeback at the lake. Once incredibly scarce, they are now appearing in greater numbers. Mayfly nymphs can be found near dense vegetation and shallows where they climb out of the water to molt. Try a dry fly pattern imitating the adult and their long tails resting on the surface for a change of pace. 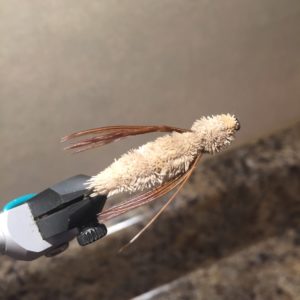 Dragon flies and damsel flies are common at Hihium. Their larvae are apex insect predators, both in and out of the water. Dragon fly nymphs scour the shallows for prey, their jaws unhinging at lightning speed to catch passing food. Both species have great vision, owing to their characteristic large eyes. Troll one slowly along the bottom, or perhaps retrieve from a cast in short bursts to recreate their movements.